The data with regard to implementation of the NREGS for some of the villages of the Dhas Gramin Vikas Kendra are as given in the table below.  The data for 2009-10 which is the year previous to intervention by DGVK and for 2010-11 which is the year when intervention took place have been given for comparison. 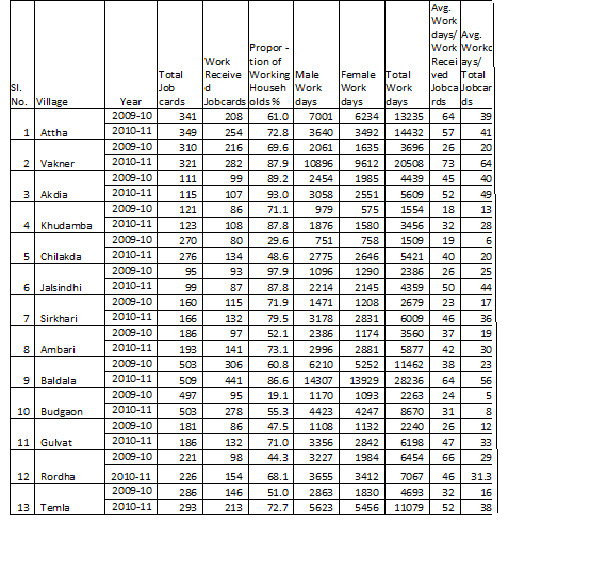 Clearly the implementation is well below the norm of 100 days for each household. In fact it was even poorer before the organisation began mobilisation around MGNREGS  from 2007-08 onwards. 2010-11 has seen a clear increase in the work made available in all the villages over 2009-10 due to the greater mobilisation effort done as part of the intervention. Due to the campaigns conducted by the organisation the villages where it works recorded more than 50 days of work under the scheme for the construction of water retaining structures. The most important achievement was the implementation of the Bhoomishilp Yojana in Baldala village for the bunding of farm plots. Over 500 hectares of land in the village have been bunded improving the soil conservation scenario there. The picture below shows women at work in Baldala. This achievement, which is a first for Alirajpur district, was widely covered in the local press.

Work under this scheme has also been done in Pujara Chowki village on lands to which rights had been won by the villagers under the Forest Rights Act. The certified land records and the applications have been prepared for the villages of Attha, Ambari, Khodamba and Vakner but due to shortage of time and active opposition from the bureaucracy they could not be submitted this year. It has to be noted here that the Block administration is dead against the implementation of MGNREGS and so getting work sanctioned is a Herculean task.  In addition to this various pending payments from earlier years amounting to Rs 12,50,000 have also been squeezed out after sustained campaigning as follows –

Widespread defalcation of funds by the nexus of the Panchayat secretary, Sarpanch and Bank officials has been unearthed with respect to the implementation of the dug well scheme under MGNREGS. Complaints have been filed with the Madhya Pradesh State Employment Guarantee Council for villagers from Barda and Ambari as the local administration is dragging its feet on the matter. Details are being compiled as a prelude to the launch of a mass campaign to get this scam exposed on a large scale.

Given the obduracy of the bureaucracy in not implementing the MGNREGS properly there is a constant need for public action. On numerous occasions the people have submitted memoranda to the SDM and Collector. Apart from this a major rally cum demonstration is to be organised on 26th February 2012 in Alirajpur to press for better implementation of the MGNREGS. Activist Shri Khemla was verbally attacked by an accountant in the Sondwa Janpad Panchayat Office. He had gone along with the people of Budgaon to submit the application for work under MGNREGS because the panchayat secretary had refused to accept it. A complaint regarding this was filed in the grievance redressal facility of the MGNREGS website. However, no punitive action has been taken against the guilty staff of the Janpad Panchayat Sondwa. There are continuous complaints of non-implementation of MGNREGS from all over Alirajpur district. Consequently, given these serious problems in getting work and payment from MGNREGS, there is a tendency among the villagers to migrate to Gujarat instead for work. A family of two can earn a net income of Rs 10000 per month by working in Gujarat in the construction industry and also as sharecroppers in agriculture and there are no delay in payments.