The KMCS has organised the villagers into small groups of ten to twelve farmers each who then pool their labour and cooperate with each other to perform their agricultural operations together and also undertake soil and water conservation activities. This is in fact a revival of a traditional labour pooling system called Dhas from which the name of DGVK is derived. This system had fallen into disuse because the intrusion of the market economy and the destruction of the natural resource base had destroyed community institutions. Considerable effort was expended to revitalise this system and it has paid rich dividends. Apart from this external funding was also sourced on two occasions for soil and water conservation work through DGVK . The cumulative voluntary work done in soil and water conservation in the two decades at current rates amounts to about Rs 20 crores . A major feature of the cooperative soil and water conservation work is the equal participation of women in it. This has not only empowered women within the traditional Bhil society which is highly patriarchal but has also given them a greater say in household affairs. A picture of women working on a gully plug to create a new farm in Gendra village is shown below.

The intensive soil and water conservation work and the forest conservation have together ensured that both natural and artificial recharge in the villages of the organisation has increased considerably and so the streams are now flowing perennially  throughout the year. This enhanced water availability combined with the availability of electricity and diesel for pumps has meant that there is considerable irrigation in these villages whereas earlier there was none. The soil and water conservation work has also ensured the greater availability of soil moisture and so double cropping has become possible even without irrigation. The egalitarian distribution of land has ensured that the water is equally distributed. Such is the water flow in the streams that even after triple cropping the stream does not dry up in summer as shown below.

The Indore Office of the DGVK is an excellent example of decentralised urban water and energy conservation.  The organisation has built an environmental haven within the city so that not a single drop of water or shred of waste escape from the premises and in the process it is covered with green creepers and trees and shrubs which keep it cool. A properly designed septic tank cum soakpit combination for treatment and subsequent disposal of sewage water is the age old certified and low cost decentralised solution which is endorsed by the Central Public Heath and Environmental Engineering Organisation in India and the World Health Organisation. It has only three drawbacks – 1. The septic tank has to be periodically cleaned of the sludge that collects in it say every five years or so. 2. Foul smelling gases are generated which have to be properly evacuated. 3. The soakpit effluent has a high BoD of about 30-50 mg/l and so it cannot be situated at a distance less than 10 meters from an open well.

All these above drawbacks have been removed at a small cost of Rs 3 per day incurred in running a 0.3 hp vacuum pump that pushes air through a pipe into the bottom of the second chamber of the septic tank. To reduce costs we have used a perforated PET container filled with pall rings instead of a bubble diffuser to create the bubbles. The switch from anaerobic to aerobic decomposition has led to near total digestion of sludge (what happens is that most of the solid waste is oxidised into CO2 and water and the remaining solids are disintegrated into fine suspended solids by the mechanical movement of the water due to the vigorous bubbling of the air and go out with the water into the soakpit leaving only a fine layer of biologically active bacteria rich sludge at the bottom), no generation of foul smelling and dangerous gases and the reduction of the BoD of the effluent of the soakpit to about 10-15 mg/litre which in turn means that the radius of soil required to oxidise the soakpit effluent is reduced to just 2 meters. Consequently, we have a handpump within just 2 metres of our soakpit and yet the water from it is within the permissible limits for BoD, CoD, Coliform, Suspended Solids which are all generated by sewage effluent.

The bathroom and kitchen wastewater of about 200 litres per day that is generated in this office of 170 square metre two storied built up area is filtered through a soakpit and recharged into the ground with a biological oxygen demand (BoD) of less than 30 mg/litre which is the permissible limit for underground release of treated water. The toilet waste water of about another 200 litres per day is first directed into a septic tank. This septic tank has an aerator installed in it that causes aerobic digestion of the waste to take place which is four times more efficient than the normal anaerobic digestioin. Thus, the inlet water which has a BoD of about 700mg/litre is treated by the aeration process resulting in a BoD of about 55 mg/litre of the water flowing out of the septic tank. This water is then filtered through a soakpit and the final water that seeps into the ground has a BoD within the permissible limit of 30 mg/litre. The installation cost of this system is less than 1 per cent of the total building cost while the running cost of the aerator is only Rs 2/1000litres/day of toilet sewage because the electricity consumption of the aerator is only 0.3 Kwh per day. Moreover, as mentioned earlier, due to the oxidation of sewage through aeration there is almost little generation of sludge and none of foul smelling greenhouse gases. Most importantly if this system is used widely then the need for a centralised underground sewer system and sewage treatment plants, which are expensive to construct and maintain, can be done away with as waste water will be treated and recharged at source itself. The rainwater that falls on the office premises is also recharged through recharge piles into the ground.

Two varieties of leafy creepers have been planted near the soakpits and these cover the walls and the roof of the building with a green leafy foliage. Trees and plants like Drumstick, Guava, Neem, Banana and Papaya have been planted in a 45 square metre garden in front of the building and together with the creepers they ensure that there is considerable evapotranspiration and shade during the height of summer to keep the building so cool that it is not necessary to even run fans let alone airconditioners or aircoolers.  The wood is used to cook food in a smokeless stove, thus, further saving on the use of fossil fuels. This improves the climate change mitigation properties of the building. The organic solid waste is composted in a pit on the roof and used to fertilise the trees, creepers and plantsThe plastic and other recyclable waste is collected and given in a bundle free to the peripatetic waste recycler women.

There is a handpump installed in the premises for water supply. The three permanent residents of the building pump 40 buckets of water everyday, about 600 litres, which is sufficient for human use and for watering the plants. Thus, here too electricity is saved and the residents are also able to do exercise to keep in good physical shape. Guests also have to pump water for their use. The physical labour done to get water ensures that it is used wisely. Thus, with treatment and recharge of waste water and use of a handpump for water supply in such a decentralised manner throughout the city,  a huge environmental and financial burden can be removed from the shoulders of the Indore Municipal Corporation. The Corporation currently is deeply in the red with only about 50% of the expenditure on water supply and 40% of that on waste management being recovered through user charges apart from crores of rupees in capital expenditure. Well to do private persons, commercial establishments, corporate houses and government institutions together are in possession of 90 per cent of the land in the city and they can easiliy adopt decentralised water supply and waste treatment systems like the Dhas Gramin Vikas Kendra has done and solve this problem of water supply and waste water once and for all. The city will become a green haven to boot, substantially reducing its electricity consumption and contribute to climate change mitigation in a major way. The office is pictured below: 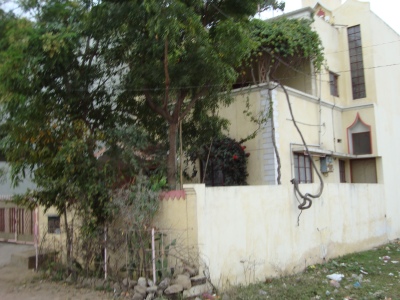